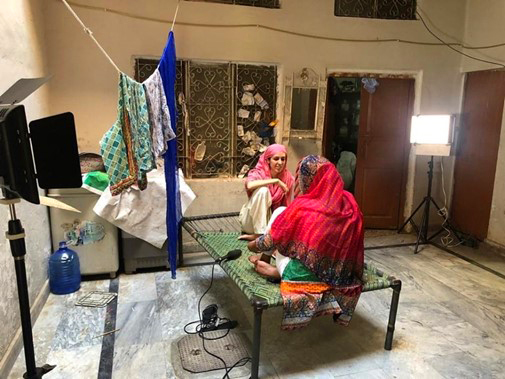 “BLUE: A Kaleidoscope” – a thought-provoking film on surviving sexual assault

How a Pakistani-American short film is breaking the stigma around speaking up on sexual assault, shining light on the tales that are often forgotten.

Just like a kaleidoscope, where regular symmetrical patterns can only reflect on each other in an enclosed tube, rape victims are often forced to reflect their traumas onto each other. The rest of the world observes a fraction of their pain, instead of the real chaos inside a survivor’s body and mind.

A similar situation is depicted in a heart-gripping story told in this Pakistani-American short film BLUE: A Kaleidoscope, produced by a Chicago-based company Arash Visuals Inc. The short film is based on a BBC report by Amber Shamsi, How rape was filmed and shared in Pakistan. 10-year-old girl, who barely knows the world as it is, is not only raped but recorded during this heinous act. The recording is then circulated amongst the sick-minded for their entertainment. Someone so young, who should be showered with joy, suffers an ill fate with not an ounce of support. The short film showcases a sexual assault survivors trauma in a heart-breaking way.

A rise in similar sexual assault cases around the world has become unignorable. Much like the people who get caught in this dreaded fate, the issue itself is screaming for attention. The dedicated and brave women behind this short film – executive producer Mehr Shah, lead actress Sundas Shaheen, and cinematographer Urooj Kamran – along with their fellow, Danial K. Afzal, the director of this unforgettable yet cold tale, aim to raise awareness. They shed light on a dark domain that no one dares talk about in countries like Pakistan where, despite all efforts, sexual abuse cases are either left unreported, unsupported, or eventually forgotten.

The BLUE: A Kaleidoscope highlights that, often, the sexual abuse survivor is wounded mentally for the rest of their lives, but the people around them take it as just another occurrence rather than providing much-needed support.

Where survivors of rape find themselves lost, helpless, and silenced, it is hard for the rest of us to see the post-traumatic stress, chronic depression, and anxiety they suffer from. Danial K. Afzal, a graduate of Lewis & Clark College in Portland, Oregon, has won countless awards for his work, which includes his award-winning documentary The Survivor. The team will continue their passion for filmmaking and breathe life into stories like BLUE that are otherwise kept behind closed doors and sealed lips. Will their efforts help us listen?