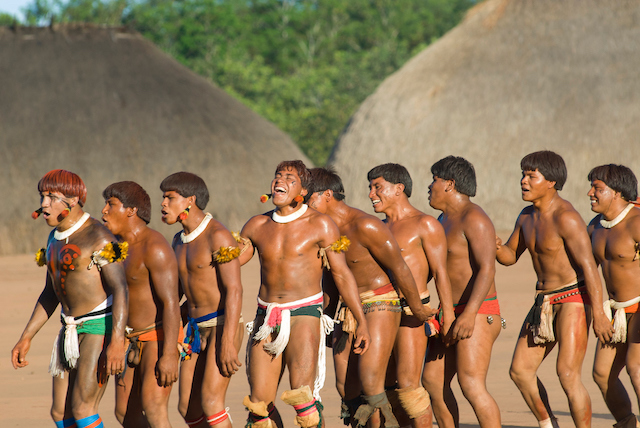 This beautiful book is a tribute to the beauty and vulnerability of the Amazon and its people, the Indigenous tribes of the Xingu River.

Photojournalist Sue Cunningham and her husband, writer Patrick Cunningham, have dedicated three decades to campaigning for the rights of the Kayapo tribal people and to the fight against the environmental catastrophe that’s evolving in the Brazilian Amazon rainforest.

“This book charts the changes in the lives and fortunes of these incredible people. It focuses on their humanity and on their individuality. It shows that they are people, just as we are people, and not simply exotic objects. It tells us that they have a fundamental right to our respect, and that we have an obligation to protect their land, their environment and their chosen way of life.” – Sting

All images in this article are by Sue Cunningham.

Brazil in my heart

Sue grew up in Brazil, with British parents, and most of her career has been photographing the indigenous people of the Xingu River tributary in South America’s Amazon basin. She lectures to undergraduate students at British Universities, and delivers multimedia talks, with Patrick, to schools, businesses and social interest organisations. She has provided photographs and information for several exhibitions, “Unknown Amazon” at the British Museum and has also had numerous solo photographic exhibitions in the UK, Brazil and elsewhere.

Patrick has written for magazines including Geographical Magazine, BBC Wildlife and British Airways High Life. He is also an author of educational books and contributed to the Insight Guide, Brazil and has carried out research in Brazil for Pro-Natura International.

Sue’s search for her images has led her to a deep appreciation of the Amazon’s environmental problems.

The terrible fires in the Amazon are about to start again!

“My book Spirit of the Amazon has made people think of our connection to the wild, to our inner self, like during isolation under lockdown. But when we come out of it, the book will still be there to remind us. Last year four of the Kayapo tribal people came to participate in a conference at Oxford. They also took a letter to Downing street, their worries were about the terrible fires in the Amazon which are about to start again and peak at the dry season in July and August.

Environmentalists are warning of a marked increase in forest fires this year that threaten a repeat of the environmental disaster that ravaged much of the Amazon in 2019.

Patrick and I are trustees of TribesAlive which supports the strong people of the Amazon, during this fragile time, that could decimate their very existence.

The Chief of the Kayapo, Raoni Methuktire sends this message to the world.

“I am worried about the future of my people

I want them to live on this land, our land

Help us to be one force together to protect peacefully

I worry that the weather rhythms are changing our crops

We need to change the way we think

Preserve the forest and river for all our children and grandchildren to come.

We all breathe this one air

We all drink this one water

We live on just one Earth

WE need to protect it!

The big winds will come and destroy the forests

You will feel the fear we feel.

We are here fighting for our people, for our lands, for our forests, for our rivers, for our children and in the honour of our ancestors.

We fight also for the future of the world, because we know that these forests bring benefits not only to indigenous peoples but to the people of Brazil and to the entire world.

We also know that without these forests, many people will suffer, even more than they have already suffered from the destruction that has taken place in the past.

All life is connected, like the blood that unites a family.

What inspires Sue to protect the rainforest?

The First time I met Raoni Methuktire, in the early 80’s, in his remote village, my soul became tethered to the forest. I never looked back, my life changed then and there. The Xingu with all its diverse peoples taught me so much about the forest and how to live. I was reborn, revitalised, alive.

Patrick and I navigated the Xingu from the Culuene river to the Amazon in our little boat “Heart of Brazil”. On this six month expedition we listened and shared dreams and hopes, battles and friendships that last a lifetime. The Indigenous people of the Xingu asked us to tell their story around the world. We’ve been documenting it all and been giving illustrated talks for years and now finally published a beautiful book “Spirit of the Amazon”  http://papadakis.net/books/the-spirit-of-the-amazon/  in English, the French edition comes out in October and hopefully next year in Portuguese! The photographs speak for themselves.

The strength and spirituality of their cultures are what inspires us. Now, more than ever we need to amplify the voice  of the Indigenous People of the Xingu that protect the rainforest.

Spirit of the Amazon is a celebration of cultural difference and a call for better stewardship of the world.

Sue’s stunning photos bring the tribal cultures of the Xingu River basin to life; she photographs indigenous people in their rainforest environment as they celebrate traditional ceremonies, and during their everyday lives. Patrick questions policies which set out to impose mainstream materialism on them and explains spiritual differences which set them apart, while showing their relevance to the modern world. The book follows the fascinating history of their interactions with non-indigenous people. From first contact right up to the current Brazilian government, and it describes how they have suffered, survived and now exist alongside mainstream Brazilian society.

During the Heart of Brazil Expedition the authors followed the course of the Xingu River, a tributary of the Amazon, travelling 2,500 km by boat. Having visited numerous indigenous villages over the years, usually arriving by small aircraft, they wanted to better understand the geographical and cultural interrelationship between the many ethnic groups which inhabit the Xingu River basin. They were the first outsiders since 1887 to take six months descending the full length of the river. On that epic journey they visited 48 tribal communities in this remote part of the Amazon.

This is the story of the tribal communities they visited; their daily lives, their connection to the land and to the rivers, the threats which pervade each day of their lives. It is also a validation of their importance to the rest of the world; why these small, remote and often secretive indigenous cultures and communities are so important to our own lives and to our shared planet. It is a celebration of their vibrant cultures, their rituals and their rites of passage. Of cultures very different from each other, but with a shared spiritual basis which respects the trees, the rivers and the rain. And it is a call for the world to protect them, their lands and their forests and rivers from the destruction which our avaricious greed for natural resources drives ever closer and deeper into their realm.

UGENT APPEAL: TrivesAlive JustGiving page for the Coronavirus Fund for the people of the Xingu is live at: