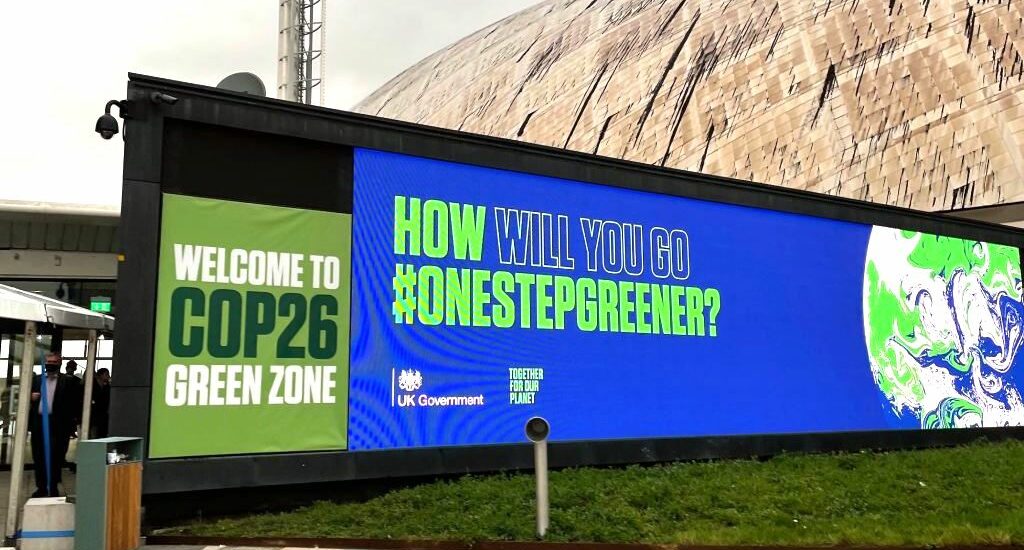 Mary Hanover from Green Social Media reports on what went on at COP26, namely the fringe events outside the Blue Zone main event.

I am on the train back from COP26 after two weeks doing the PR for a youth climate conference called The Extreme Hangout. It was one of the fringe events that many said eclipsed the main event in the Blue Zone at COP26. The Blue Zone is somewhere I never went as I didn’t have a pass, and unless you’re a delegate, a journalist, an invited speaker or someone famous, you are excluded. Hence, the fringe events, like the one I worked at, became the place to be. Climate activists of all ages, from all over the world, congregated, networked and discussed at our event.

I met Diwigdi from remote islands off the coast of Panama, who showed me videos on his phone of extreme flooding, water gushing through homes and what living on the front line of climate change is really like. And there were others just like Diwigdi, some dressed in bright indigenous clothes, some with feathers or handcrafted jewellery, with a dark duffle coat thrown on top for warmth. These climate warriors from the Global South and island nations at COP were the “canaries in the coal mine” of climate change. I met youth Climate Ambassadors sponsored by NGO’s from Hawaii, Maldives, Seychelles, Barbados, Bahamas, all sounding the alarm bell that urgent action must start now and anything above 1.5 °C is the end to their country, their nation.

We had live-streamed panel discussions running all day, every day, on almost every conceivable topic ranging from “Words are pretty Blah Blah Blah” to “Why everyone hates vegans and what we can do to change that”. There was a palpable energy, a melting pot of youth activists, Eco-Social media influencers, famous models turned environmentalists, NASA astronauts, Polar explorers, Olympic athletes, football stars, musicians, artists, filmmakers, and famous faces like Bear Grylls. Nearby Prince William and Kate plus stars Idris Elba, Ellie Goulding and Leonardo Di Caprio attended the Blue Zone panels and other events. Was COP26 a political climate conference, a trade show or a festival?

I ventured away from our busy fringe venue, walking along the River Clyde towards the Blue Zone in the Armadillo building to get a explored what went on at COP26 on the outside of the main events you would have seen in the news. I felt I had stepped into a dystopian film set: XR protestors in red robes with painted white faces, drums, chanting, urgent banners and signs about climate change, dozens of sheets of fabric painted by children, with words like “Stop Killing Us”, a circle of indigenous activists performing a ritual, groups of XR rebels, dozens of police, metal railings, security guards. . . all against a brittle backdrop of industrial Glasgow, harsh grey skies and concrete. I panicked:  is this a foreshadowing of the brutal Brave New World future to come?

After clearing an airport-like security, I entered the Green Zone, which barely lived up to its name. Held in the Glasgow Science Centre, it looks like something out of Star Trek and the furthest you could get from feeling green or in tune with nature. After wandering around for an hour looking at displays of soil-free lettuce and artificial rainforests, I got eco-anxiety and left.  I questioned whether COP should take place in beautiful natural settings to inspire and remind delegates what needs to be preserved and saved instead of this man-made artificial environment without a blade of grass in sight? There was a wonderful talk at our venue, by former NASA astronaut Nicole Stott, who said that all the  world leaders should be sent into outer space, have their  COP meeting from the space station looking down at planet earth, the way she did, seeing it as this living breathing organism with such a thin fragile atmosphere and realise we are all one species living on planet earth. She said “we all need to start living as crew members, not passengers of spaceship earth”.

Greenwashing went on in Glasgow too

Another fringe event that took centre stage this year at COP26 was the uber cool, impressively large New York Times Climate Hub held at the expansive SWG3 venue under the arches. Security to get in was intense. Not only did it have high level speakers like Mark Carney, Stella McCartney, Nick Mulvey amongst scientists and young climate champions, but an artist and set designer Es Devlin created an immersive temporary forest cinema with 197 trees & plants representing the 197 parties attending the climate convention. The website states the native trees and plants will be replanted in Scotland as a new public garden, but when I returned a week later, at the end of the conference, the once fresh scented forest was dying and decomposing.

I was invited to a private party on the first Saturday of the conference at the New York Times Climate Hub, hosted by the Natural History Museum in something called The Nature Bar. The venue, used for Glaswegian raves, was transformed like a stage set, with mood lighting, wood furniture, plants and display shelves of scented candles, ornaments and books evoking a sense of travel and nature. The vibe was an eco-version of Soho House. Beards, beanies, organic, sustainable fashion and jewellery from the global south were de rigueur. A lot of the guests were members of the Global North, the 1% with larger than average carbon footprints. Although I love a party and admittedly enjoyed the mezcal cocktails, I suddenly felt a bit guilty, and looking around everything felt sort of jarring and contradictory. Weren’t we all at COP26 because humanity is on the verge of the existential abyss, (as UN Antonio Gueterras warns)? And yet, like the Titanic sinking, the party must go on, the drinks are poured, the music played, the chatter, clapping and networking broken intermittently with someone reciting poetry or speaking about their recent Arctic expedition or newly published book.

With all the sponsorship branding very visible everywhere, from Morgan Stanley to Unilever, it felt like Net Zero is the new gold rush. It’s on trend to now care about carbon footprint, pollution, overfishing, climate justice and incorporate the green vernacular and lingo into everything you do. Companies with ecocide legacies are at COP26 sponsoring events and panels about how to re-forest or clean up oceans and stop pollution while single use plastic still sits on refreshment tables. I was surprised how many people attending a climate conference flew up from London instead of taking the train. And by the second week, I noticed how youth activists became afraid they were being used for “youth-washing”, the latest term that’s evolved since “green-washing”. I even heard complaints about “Indiginous-washing”.  Greta Thunberg didn’t attend any events, distancing herself from all the sponsorship and greenwash. She was out on the streets at protests careful not to associate herself with anyone or anything outside her own climate movements. She was considered PR gold-dust and every venue hoped she might stop by.

I went to visit the Non-Profit Arctic Basecamp, hosted by one of the investment companies sponsoring a fringe event at COP. I walked past a large panel discussion in a tent attended by a lot of men in suits and headed to the outside area to meet Professor Gail Whiteman and see a 4 ton iceberg delivered to COP26 from Greenland as a publicity stunt: a visible reminder of what Arctic warming means for the planet. Arctic Basecamp gave me around 40 bottles of ‘arctic melt” water from melting icebergs due to climate inaction. Throughout the 11 days I put them out on the stage refreshment table for the panellists, I placed some in the press room and studio, I even gave some speakers their own bottle, but unless I explained what it was, the majority of people would just casually open a bottle, drink the iceberg water without stopping to think about what they were actually drinking.  It became rather symbolic to me and I managed to save the last bottle which I brought back with me to Wimbledon as a “memento” of sorts.

Mary Hanover offers planet friendly PR  and social media to ethical brands, NGO’s and individuals on a green mission for a sustainable future. Find her on www.greensocial.media Instagram: @greensocial.media

All the panels can be watched here: CATCH UP | EXTREME HANGOUT 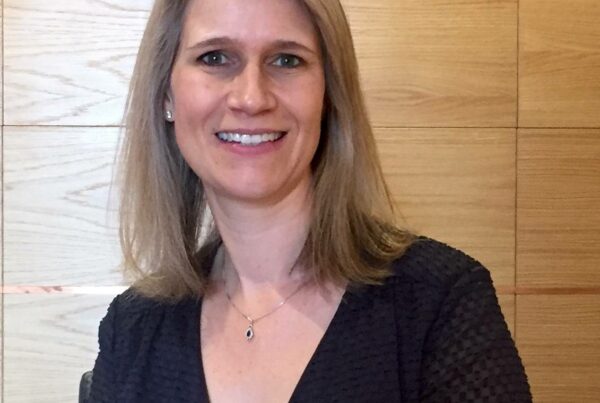 How to achieve a happy work-life balance 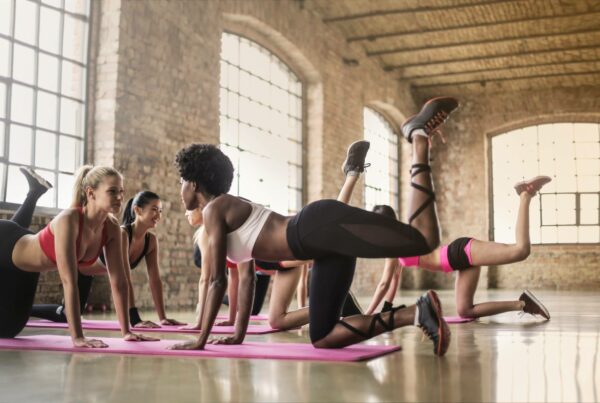 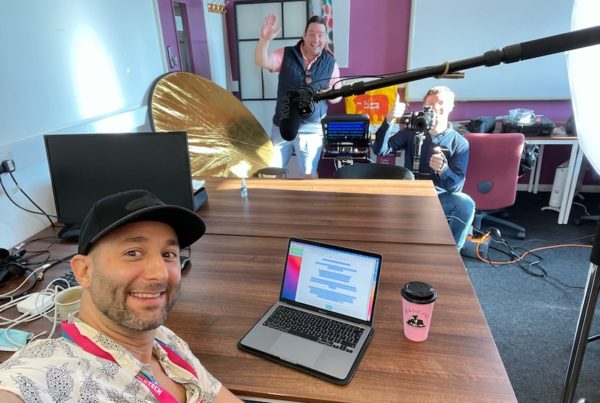 Flexible workspace and meeting rooms near you