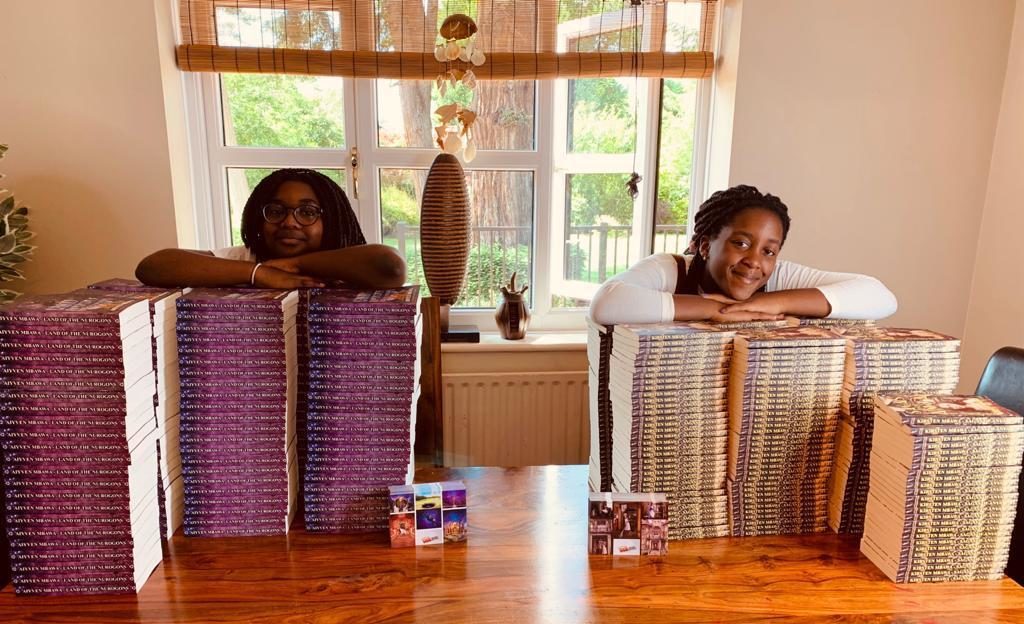 Kirsten and Aiyven are 13 and 12 year old sisters and total book addicts.

“From as early as we can remember, we always read to the girls, even before they could speak, mother Ndah tells us. So bed time stories formed a big part of the night time routine. The love of books runs in the Mbawa family. Ndah became a keen reader on her university days and her father loved reading too, going on charity shop book hauls whenever he came to visit.

The girls caught the reading bug and made great progress through the early years reading stages until they were reading chapter books non-stop and getting obsessed with some authors along the way. There was a point we had to have a Jacqueline Wilson ban because that’s all they would read. As parents, both their father, Valentine and I struggle to find enough time to read physical books these days, but I do read a lot of stuff digitally which satiates that need at least”.

Kirsten is the quieter big sister, sometimes assuming the role of a deputy mummy who as she likes to say sometimes herds the crew! She’s methodical, organised and consistent in anything she puts her mind to. At school, Kirsten’s favourite subjects are English, PE, Theology & Philosophy, Biology and Latin. Apart from reading, she loves gymnastics, tennis, playing Roblox, playing the piano, Uno and learning Mandarin. Her favourite genres are dystopian, historical fiction, realistic fiction and horror.

Aiyven on the other hand is more boisterous, chatty and a bit of an encyclopaedia. She loves to read fantasy adventure and realistic fiction. Her hobbies are gymnastics,  tennis, playing SIMS and minecraft, also playing the piano Uno and learning Mandarin. Aiyven’s favourite subjects at school are English, PE, German and French.

It started with the BBC young writers competition

In February 2019, their nanny Judith, fondly called Nana Juju, told them about the BBC writing competition being open. She’d always said I’ve never known children read so many books and their imagination! In March 2019 after the sisters had entered the contest, they started a book review show on YouTube as a way of sharing their love for reading and writing with other children. After the results of the BBC writing contest were published in June 2019, even though they didn’t win, Aiyven and Kirsten built on their entries and wrote middle-grade novels which were self-published in April 2020 through a successful Kickstarter campaign.

The girls worked ever so hard on their books and got first hand experience of what it’s like to work with an editor, cover designer and illustrator. They kept to a strict schedule, fiting in around 45 minutes of writing time on most school evenings! Both were writing even whilst watching TV or taking their laptops on the school run to write scenes they were particularly engaged in.

The books, Sagas of Anya by Kirsten & Land of the Nurogons by Aiyven, are on Amazon and their website www.mbawabooks.co.uk. Sagas of Anya is a piece of historical fiction based in Victorian era Cardiff and London. It charts the story of a Welsh teen Anya, who loses her mam (mum in South Wales) to a long term illness, after which her tad (dad in South Wales), unable to cope with the grief, takes to drink and loses his livelihood and much of their belongings. It’s not long before her Tad, no longer able to care for Anya, ships her off to London to work as a scullery maid for the nasty Mrs Axton. It is there that Anya’s trials and tribulations take on a new height.

Aiyven’s book Land of the Nurogons is a fantasy adventure

Who would’ve thought Hayden Smith was the ‘Chosen One’? Certainly not him. And true to what he suspects, his fate can’t be avoided. He is to save Nurogonia from peril. Nurogons the inhabitants of Nurogonia are strong, four-fingered, two-toed, freckled and muddy green creatures, about the size of a toddler. They have long dark green nails, green eyes, sloping noses, big white teeth, hunched backs, and large chins under which are several folds of skin. This parallel dimension which Hayden fell into and has come to love needs urgent help. Hayden with the help of a few friends must embark on a quest to save Nurogonia from the hands of evil Sosiri who plans to turn Nurogonia into something unimaginable. If he succeeds, many will die…Hayden’s problem to prevent. If Hayden fails? Oh, never mind!

News of the publication of their books garnered so much support from many and even press outlets like Northampton’s local paper (Chronicle & Echo), The WeekJunior (Pg. 27) and BBC Look East TV

In November 2020, the girls launched a book subscription box for 8-14 year olds. They are on a mission to promote literacy and diversity in middle-grade literature by creating a more engaged community of readers. Their box, Happier Every Chapter, is getting rave reviews from parents and kids alike. Their monthly themed boxes come with 2 epic reads (including a diverse book), 2 short stories (which they write), activity sheets (which they design), exclusive author goodies, 4-6 bookish treats/lifestyle items and access to a community for author interviews, competitions etc.

The girls set aside a day or two each month to write their short stories, design the covers and activity sheets as well as the vocabulary and the welcome sheets which go inside the boxes. Also, once every three months, they select the books for the upcoming quarter and select and purchase the lifestyle items for those months. They also do an author live interview once a month with the author of the book. As a family, we rally round to do the boxing once every month before boxes ship on the 12th each month. They are supported by a part-time social media co-ordinator and us as parents to keep the social media presence ticking over. Please find out more about their boxes here: https://www.mbawabooks.co.uk/pages/subscription-box.

You may also enjoy reading https://darlingmagazine.co.uk/women-to-watch/motivational-speaker-at-13/

Children in care James Summers’ Story – can they thrive, not just survive?